So many people talk about how difficult deployment is, but nothing is as difficult as saying goodbye beforehand. Watching the one you love get on that bus seals the impending separation you’ve been dreading for months. If you’re lucky, you know about the deployment six months to a year ahead of time. If you’re not so lucky, you know only a few months, even just a few weeks, before you’re without your spouse for seven months to a year (depending on the military branch). Thankfully, in the Marine Corps, the usual deployment length is seven months, though that’s not always the case. Every Marine wife has to mentally prepare for the possibility of an extension and finding out of that extension during her preparation for his homecoming. In mine and Evan’s case, we fell among the lucky ones to know about his deployment early on. Projected dep. dates were given nearly seven months in advance. With deployment in the distant future and a baby on the way, we ignored that dreaded date for several months.

Those months slipped by quickly and even towards the end, we got so caught up in life— Little Man’s birth, my leg surgery, and packing up the apartment—that we were almost surprised when the final day before he had to leave came upon us. Tears flowed and emotions raged. We didn’t know what to do but cry and hold tightly to each other. Evan was scheduled to leave at 2 A.M. but had to be in by 10:30 P.M. to draw weapons. We lived a half hour from base, so Evan wanted to leave an hour early to make sure he got there on time. We decided to spend the last couple hours with our neighbors, because we couldn’t stand to be in our gloomily empty apartment which was mostly packed up. The clock ticked 9:45, and we still hadn’t left yet. Mentally exhausted and emotionally spent, we wearily packed up the car with Evan’s gear, coffee, food, books, blankets, and pillows. (You always prepare to spend a long time waiting.) By this time, we just wanted to get this part over with.

The car ride was silent. There wasn’t anything we hadn’t already said to each other, and Little Man was sound asleep in the back, not knowing his daddy would be leaving for a very long time. Christian music played softly in the background, but when a song about wanting to be home came on, Evan quickly clicked off the radio. With a broken smile, he turned to me and said, “We don’t really need to hear that right now, huh?” Through newly formed tears, I tried to smile back but looked towards the window as those tears came trickling down my cheeks. I couldn’t let him see me crying again. I had to be strong. I had to be strong for him. Knowingly, he reached over and squeezed my hand. The sound of quiet sniffles made me realize I wasn’t the only one trying to be strong. I held tightly to his hand, and he calmly whispered, “We’ll be okay. God will take care of us.” A new wave of strength flooded through me. He was right; God would take care of us.

Minutes later, we pulled up to the weapons building. The chaos of trying to figure out what to do and where to park kept us distracted for a while. Finally, Evan told me to park behind the Field House. Usually the Field House is opened for families to mill around in as they wait for the buses to arrive, but for some reason or another, it was closed that night. The air outside was in the low twenties, so Little Man and I stayed warm in the car as Evan had to run around doing things. With Little Man in my arms, I people-watched from inside the car, wondering about their life stories as I saw them. A young mom in the car next to us rapidly snapped pictures, trying to catch every last moment of her husband and their three-year old daughter together. I could tell the little girl was confused and didn’t quite understand what was about to happen. Watching them made me want to cry, but I couldn’t. All my tears were spent. After what felt like forever, Evan finally climbed back in the car and remarked that he had a little time before anything was supposed to happen. He asked to hold Little Man, and we cuddled closely together for the last time as a family. I guess we fell asleep, because we were suddenly awakened by a knock on the window; it was one of squad leaders saying it was time to go. My heart sank as I saw the coach buses pull into the parking lot. I looked at the clock; it read 3 A.M. “Of all the times for the military to be somewhat on time, why did it have to be tonight?” I thought to myself.

I wanted to go with Evan to the bus, so we bundled Little Man up really well and slowly walked to the lines. I’m pretty sure Little Man was the warmest one there. He was buried among two feet of blankets. I know I looked silly holding this huge bundle in front of me, but I didn’t care. I didn’t care what I looked like. I didn’t have makeup on; what was the point? My hair looked like a pin cushion on fire, and I was shivering so hard, I probably resembled a bobble toy. Slight confusion broke out as the men tried to break up into squads alphabetically. It amazed me how many guys needed a crash course on the alphabet. Evan made it through the check-in line, and we walked even slower to his assigned bus. We got to the door of the bus, and with one arm I pulled him tightly to me. I didn’t want to let go. I didn’t want it to be real. He wrapped his arms around Little Man and me and showered my face with kisses. “I can’t say goodbye,” I whimpered, as tears welled up in my eyes. “Then don’t. This isn’t really goodbye,” he replied.

He continued on to say, “I want you to know that I didn’t write a ‘last letter,’ if I were to die. Please don’t be upset. I didn’t do it, because I’m positive God is going to bring me home. I need to believe that He will. I love you so much, and I will see you again.” I marveled at how positive he was being. We then embraced and gave each other a final kiss. I couldn’t bear to watch him step on the bus, so I quickly walked back to the car. Little Man cried the whole ride home, which helped distract me. I stayed distracted until I climbed into bed, alone. This was it, the beginning of a long pause in our married life. Exhausted, my body quickly gave way to sleep. The goodbye was over. Daylight would come soon. 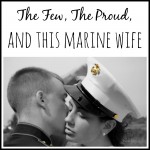